Tuesday 8 April pop down to Raise the Bar at Labels in Soho for an evening of music, & spoken word.

Claire Bennett's excellent research has highlighted issues faced by lesbian asylum seekers in the UK. Check out this article on her findings in The Independent. 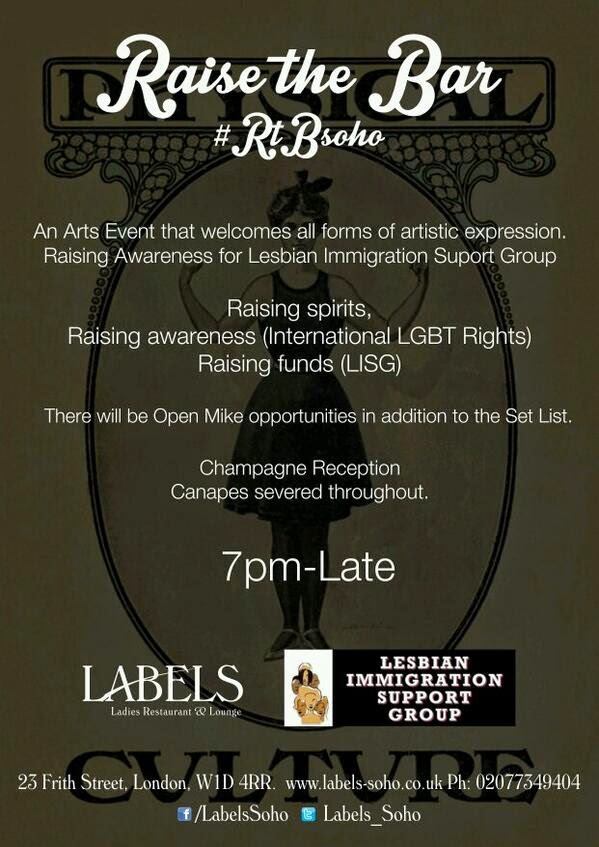 
﻿
﻿
﻿﻿Channel 4 news has been investigating what life is like for diverse LGBT communities in the UK, including the culture of disbelief faced by LGBT asylum seekers.

It's great that these issues are being highlighted by the mainstream media.

Here's the wording of the 26 March motion in full:


"26 March 2014 - Asylum Seekers
Manchester has a long history as a welcoming and tolerant city to those fleeing persecution and the strong record of the Council in protecting and speaking out for the most vulnerable. Manchester and Greater Manchester have a large population of asylum seekers and refugees.
Worldwide, approximately 80 countries criminalise lesbian, gay, bisexual and trans people resulting in persecution, imprisonment, and even death. The deteriorating situation for LGBT people in Uganda, Nigeria and Malawi has been heavily documented. Some of these LGBT people who have been tortured or imprisoned, flee to the UK for safety.
Reports from the Home Affairs Select Committee, Stonewall, The Lesbian and Gay Immigration Group and leaked Home Office documents detail the culture of disbelief and inhumane treatment facing LGBT asylum seekers in the process.
Asylum seekers face a lengthy application process, poverty and homelessness. The Red Cross (2014) found that over 50% of Greater Manchester’s Asylum Seekers had been living in destitution (no access to public funds or housing) for over two years. Asylum seekers want to work to support themselves, but are not allowed to do so by the Home Office.
Often the financial burden falls on local authorities to support those with no recourse to public funds with little central government support.
This Council resolves to:
• Re-state our commitment in support of the fair treatment of LGBT people fleeing persecution and ensure that these values are shared by partners and funded groups working with asylum seekers.
• Write to the Home Secretary voicing concerns that the current application of the asylum process allows too many people to fall destitute and that responsibility needs to be more equally shared between local and national government.
• Sign up to the relevant sections of the Still Human, Still Here Campaign which includes faith groups, charities and a number of other Labour Councils such as Liverpool, Leeds, Bradford, Glasgow and Sheffield.
• Encourage all Manchester MPs to adopt this position and raise these issues nationally.
(Signed by Councillors Craig (proposer), Richards (seconder), Ollerhead, Karney,and Chappell)"
***

This year Uganda passed harsh new anti-gay laws - life imprisonment for lesbians and gays and imprisonment for straight people if they do not report suspected gays to the police. Check out Channel 4 news coverage on including an interview with human rights campaigner and LISG volunteer Prossy Kakooza.

LGBT laws in Malawi are currently under scrutiny, with the UN assisting the Malawi Law Society's high court challenge to laws criminalising lesbians and gays.  In 2013, Mercy Kumwenda came out publicly as lesbian to raise awareness of issues faced by gay women; “People think that you are a witch, abnormal, satanic or you just want to make money but for me its inborn.... Leave lesbians alone. They are human being no matter what people say." Since she came out, Mercy has received death and rape threats, and has been disowned by her family, she now lives in hiding.

New anti-LGBT legislation in Nigeria includes a provision to punish with a jail term of up to 10 years anyone who operates or participates in gay clubs and organisations. Anyone who makes a public show of a same-sex relationship will also break the law and could face jail.

Over 75 countries criminalise same sex relationships. At LISG we have asylum seeker and refugee members from a number of countries including Pakistan, Saudi Arabia, Cameroon, Afghanistan and Kenya. Check out this Channel 4 infographic on gay rights around the world, from marriage to the death penalty.

It is not just anti-gay legislation that our members flee from - they face persecution from community and family members as well as state officials. They come from countries where there are no laws to protect women from forced marriage and marital rape; and there are incredible barriers to women living and supporting themselves independently.